Apple Store - Sydney
Originally uploaded by sHzaam!
I wonder if it's possible to run iTunes and Windows Media Player as the music players of choice on the same music, in different accounts, on the same PC.

Ever since W won a iPod Touch at a conference, she has had to use iTunes to organise her music and transfer tunes to her device. I, on the other hand, have always used Windows Media Player. So we both built up music collections in our own accounts on my PC, with the added complication that I started ripping my CDs as .wma files, then changes to .mp3 and W started out with .aac before I changed it to .mp3 in an attempt to at least have some consistency between our collections.

However the collections ended up a mess, with both of us having the same music ripped in different formats, so I decided to wipe both our music collections and start again.

I thought that if I set both iTunes and Windows Media Player to rip tunes to the shared "Public Music" folder, then both programmes would be able to read and use the music. Then anything one of us ripped in our own account would be available to the other.

However, it seems that unless iTunes did the ripping, then it won't acknowledge the music is there. Windows Media Player will, but you have to tell it to look in the folder again to realise there is more music there. (I think that is how it ended up - I actually tried this a few months ago) So it didn't work, and my dream for a gloriously harmonised music collection embracing both Apple and Microsoft and bringing them together like quarrelling cousins, has failed.

So my question is: what should I do to arrange my music in two different accounts on the same PC. Is it not possible to do this using different programmes? Should I just swallow my pride, become an Apple fan-boi and start using iTunes? If I use iTunes should I "future-proof" my collection (or rather "Apple-proof") and rip it all as mp3? What do people do?

Any advice would be very welcome. No suggestions for WinAmp please!

btw I listen to my music on a Nokia N95, and intend getting a Nokia N97 when it comes out. I can't deny being tempted by the iPhone though, but I still don't want to be a fan-boi...

The ultimate vision is to have all the music running on one computer, and having a nice Squeezebox system set up.
Posted by Major_Grooves at 11:03 pm No comments:

Lovefilm.com Film Desktop
Originally uploaded by lildude
As someone who enjoys (and whose job involves) data analysis, I imagine that one of the cool things about running a huge business to consumer internet company, apart from the pots of cash, is the chance to analyse customer data and work out its affect on revenue.

Where do your customers come from? What sites refer the most paying customers? How long do they stay on the site?

What's more interesting than analysing the data, is making changes to your website and your business and seeing the effect that this has on customers. For example, does moving the "buy now" button to a different part of the screen increase conversion rates, how does a customer sign-up process affect customers completing their purchases?

These changes can mean millions of pounds of extra revenue for internet companies. Of course not all customer behaviour changes involve the website itself.

LoveFilm has recently made a change to the way its service works. It's quite a subtle change, but I have no doubt that it means extra revenue for them.

It used to be that if you received two DVDs at the same time from LoveFilm, you would also receive an extra return envelope with your DVDs, in addition to the envelope it arrives in, which you usually convert in to a return envelope. LoveFilm are desperate for you to return as many DVDs in one envelope as possible. Obviously sending two DVDs back in one envelope means that their postage costs are halved.

Fair enough. When I did happen to watch two DVDs in short succession, I would return them in the same envelope. However, like most people I usually watch them at least a few days apart. Once I've watched one, I want it sent back so I can get the next semi-surprise DVD as soon as possible.

So, recently they have stopped sending you a spare envelope as standard. This means that if Lovefilm sends you two DVDs at once, you can't necessarily just watch your DVDs and send them back as you watch them. Of course, they say you can send them back Freepost in your own envelope, but that costs me an envelope, and you can be sure that most people won't be bothered to do that.

The obvious cost saving is reduced postage costs, but I do wonder if they save more money by altering customer viewing habits. If you wait till you've watched both DVDs before sending them back then you hang on to your DVDs longer, which means less DVDs get posted out, which means less handling costs and less DVDs need to be held by Lovefilm.

/edit Thanks to the comment from the helpful LoveFilm user experience bod below, I have now been shown that there is in fact still an easy link to request an extra envelope. Doh! I've clicked it so only time will tell if I receive one.

It's not that it hugely bothers me - I've been maxing my account out on Battlestar Galactica recently anyway! It's just irritating that Lovefilm have moved in to that phase of their success cycle when they do things that are just irritating to customers, but which probably result in higher revenues for the company. We've seen Ebay do it in spectacular style, by giving the impression that they almost want to alienate their entire customer base. It would be a shame if Lovefilm went the same way.

That said, I'd say about 1 in 4 of the DVDs I receive these days are nearly unwatchable. I'm sure it didn't use to be so bad.

and another question - if the DVD pouch doesn't mention the DVD on it, does it really matter to return it in the same pouch? I can't see any kind of chip in them...

eventually DVD postal services will die off just like visiting your local Blockbuster. We'll all be downloading all our movies (legally that is). I wonder if Lovefilm will still be around then...
Posted by Major_Grooves at 6:35 pm 5 comments:

Try this out for fun: http://lab.andre-michelle.com/tonematrix
Posted by Major_Grooves at 9:58 pm No comments: 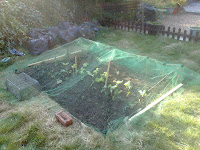 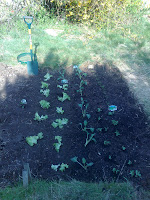 After having abandoned the garden more or less for the last 3.5 years, W and I decided that we would try to rescue the vegetable patch and grow some food.

Last weekend W spent ages weeding and digging the patch. Today, we went to the garden centre and bought loads of seedlings, some compost, a spade and a few other bits and bobs.

I have to say, I think it's looking pretty good!
Posted by Major_Grooves at 6:44 pm No comments: