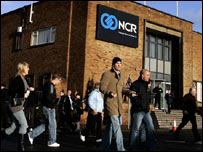 One of Dundee's last big manufacturing employers has announced that it is to cut 650 jobs in Dundee and move production to a plant in Hungary.

How depressing. Dundee has lost a lot of manufacturing jobs over the years, but this one, with the knock-on job losses to suppliers etc., really is sad. I can imagine there must be a real black cloud hanging over the city at the moment. It's just a sad consequence of globalisation. There's no way manufacturing in the UK can compete with cheaper workforces in Eastern Europe and beyond.

I was watching a BBC2 programme the other day with Jon Snow explaining that the UK was moving away from manufacturing to become a "knowledge economy". Fair enough. Dundee has a very good biotechnology sector, which now employs around 3,800 people and accounts for 15% of the local economy.

Somehow though, I doubt these 650 NCR workers will be donning lab coats and taking up molecular biology. With no offence meant to people who work in supermarkets and the like, I always think it's a real shame when these skilled workers are told that they could get a job stacking shelves or working a checkout till. That must be so demoralising.

I sometimes wish I was a rich Richard Branson-type, and could invest all my money in Dundee. Trying to help set up companies and stuff like that. I think I've played too much Sim City. Hey, you never know - maybe one day I'll be a Venture Capitalist and set up a fund for biotech start-ups in Dundee!
Posted by Major_Grooves at 11:45 pm

My workmate (the sane one) constantly puts up with me painting Dundee as some kind of paradise and so much better than Leicester, but one thing Dundee never had was jobs after Timex. I'm really worried this might finish it.

I worked for NCR a lot in various guises (school workplace, student intern and finally ATM tester/zombie) and the HR people on the 3 inductions (they used to walk you through the whole place even if you were serving the tea) always went on about how loyal NCR was to its employees - talk about corporate bull.

Mind you the writing's been on the wall - they stopped graduate recruitment in 2001 when I graduated and froze wages even for their research/programming staff - I'd a few friends working there.