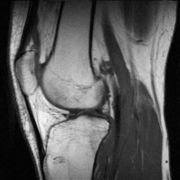 As I mentioned at the start of the year my gammy knee has been flaring up.

I decided to take advantage of my work's private healthcare insurance and see if I could get it sorted out.

It's actually slightly more involved to get an MRI scan privately than through the NHS as they insurers want you to be referred by a consultant rather than the GP. From those I've spoken to, the main difference is that getting that first scan appointment is much faster once you go private.

Anyway, I've now had the scan, and the consultant has taken a look and can't see a thing wrong with any of the structures in my knee.

The next step was to try a cortisone injection in my knee to see if that would stop whatever was getting inflamed in my knee.

So on Wednesday I went in to the hospital and got a mixture of anaesthetic and cortisone injected in my knee.

Soon as I got home from the hospital I thought I would go for a run to test my new steroid enhanced knee...

...is what everyone has said to me when I tell them that.

Well, it's fair to say everything expect my knee hurt during the run. Mainly my lungs. I was missing my little W pace-setter!

on Thursday, however, I was in a fair bit of pain and was limping about in the office.

This meant one of two things: the steroid probably was in the right place but had made no difference, or this was the initial reaction to the steroid injection (which, I was warned, meant my knee might hurt for 24h).

So now my knee feels fine. I will probably try another run next weekend to test it again. Fingers crossed... then my international rugby career can recommence.

On Monday I go off to India for work for a week. Should be interesting!