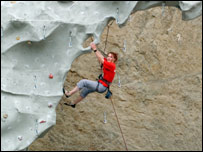 Public transport access may be important. I;m not sure where it is exactly and how accessible it is, but they are hoping to get a direct bus service. The Castle is easily reached by bus of Tube. Maybe they should run a mini-bus service if the centre is isolated?
Posted by Major_Grooves at 1:37 pm

Cheers. I knew it was in the Edinburgh area but figured it would be some distance from the actual city (what with it being in an old quarry and all). If it can only be reached by car then that's not so great.